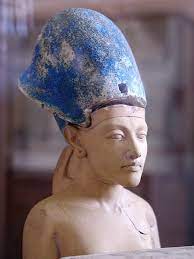 Egyptian pharoah who ruled from 1353-1336 BC. Before the fifth year of his reign, he was known as Amenhotep IV. Noted for abandoning Egypt's traditional polytheism and introducing Atenism, or worship centered around Aten. Built the capital city of Amarna, formerly known as Akhetaten. Patron of the pictorial arts. Akhnaten ruled as pharaoh for 17 years until conservative traditionalists revolted against the new religion and assassinated him. Akhnaten’s monuments were dismantled or hidden, his statues destroyed, and his name was removed from historical documents and records.Subject of a popular modern day Opera composed by Philip Glass. Father of his successor, Tutankhamun.