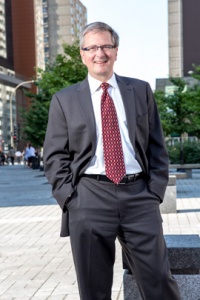 President and Vice-Chancellor of Western University since 2019, prior to which he was President & Vice-Chancellor of Concordia University of Montreal (2012=2019) and professor of English in Concordia’s Faculty of Arts and Science. Has written extensively on topics such as contemporary theatre, theatre and national security, writing and logical argument, and the rapidly changing academic and administrative environment for today’s universities. Former editor-in-chief of the bilingual, multidisciplinary Canadian journal 'Renaissance and Reformation/Renaissance et Réform'. Notable books include 'Coming to Class' (1998). Formerly Ryerson University’s provost and vice-president academic. Formerly active in LGBTQ affairs at the University of Virginia where he obtained his PhD.