Difference between revisions of "Andrew Rannells" 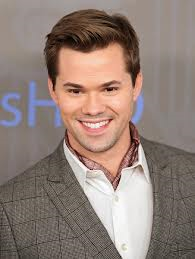 Hollywood actor who appeared in television show 'Girls', and the former show 'The New Normal' as part of a gay couple having a child by surrogacy. Tony Award nominee for Best Leading Actor in a Musical for 'The Book of Mormon'. Also took the lead role in the Broadway theatre production of 'Hedwig and the Angry Inch'. Appeared in the Broadway revival of 'The Boys in the Band' along with Jim Parsons, Zachary Quinto, Matt Bomer, Charlie Carver and others. Author of his memoir, 'Too Much Is Not Enough: A Memoir of Fumbling Toward Adulthood' (2019).