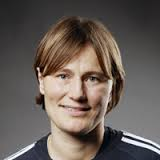 Handball player and coach with several local teams. Gold medals at the Olympic Games in 1996. World Champion (1997) and European Champion (1994, 1996). Known for creating a unique style of handball play that has ranked her as the best handball player in history. IHF World Player of the Year, 1997. Member, Danish Hall of Fame.