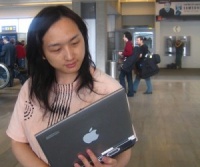 Non-binary Digital Minister, and formerly Minister Without Portfolio since 2016, in the Taiwan Executive Yuan. Computer scientist and engineer, known for initiating and leading the Pugs project, a joint effort from the Haskell and Perl communities to implement the Perl 6 language, and other contributions to free software. Referred to as one of the top ten computer programmers in Taiwan. Named one of the world’s most prominent political figures and influential thinkers by US news publication Foreign Policy (2019). Transgender, formerly Autrijus Tang.