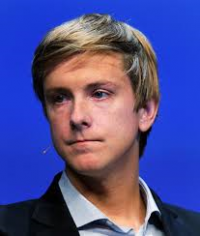 An entrepreneur and technology geek, Chris Hughes was one of the four founders of the social networking site Facebook. The popularity of the site coincided with, and helped fuel, the rapid rise of social media use in today’s world. It is based on his notion that community, and how we use technology to build and communicate within it, are important to everyday life.

Born as a single child in the conservative state of North Carolina, Chris Hughes quietly applied to prep school and was admitted on scholarship to Phillips Academy in Andover, Massachusetts. Once transitioned from a conservative environment to a liberal one, Hughes felt comfortable in identifying as gay and abandoned his confining religious background as an evangelical Lutheran.

Moving on to study at Harvard University, Hughes met up with Mark Zuckerberg who presented him with the idea of a website that would link together the students of Harvard as a social network. They called this formative venture Facebook. Whereas Zuckerberg and others would take care of the software coding required for the project, Hughes focussed on the design of the site and marketing it to students.

The popularity of Harvard’s Facebook within the university soared. The group quickly realized they could export the idea to other university communities. At first, they designed these other sites as unique platforms so that students would feel safe in the social context of their familiar environment. Once again, the popularity of these additional websites soared.

While Hughes continued to study for a liberal arts degree in history and languages, he continued to devote considerable time to the Facebook project. He is particularly credited with coming up with the ideas that made Facebook useful and attractive to its users. He was the product manager who focussed on the functionality for the site. Hughes eventually graduated from Harvard in 2006.

The Facebook project received a significant boost in 2006 when political candidate Barack Obama and his team approached the Facebook organizers to enquire whether they could have a political profile in the various communities. This lead to a realization of the enormous potential to communicate and rally a community using this social media platform. The lift-off for the site was immediate, with Facebook growing to over 10 million users by 2007. Obama’s campaign group hired Chris Hughes to manage its social media strategy which ultimately helped get him elected as President of the United States. Hughes oversaw the development of the online social networking site MyBarakObama.com. This site eventually raised more than US$ 500 million by generating more than 2 million donations of less than US$ 200.

Facebook went on to global acclaim and has become the dominant social networking site in the world. Credit for this is ultimately due to the ideas and marketing strategies developed by Chris Hughes. The power of it is shown by the success in helping elect the President of the United States.

In March 2009, Chris Hughes joined the venture capital firm General Catalyst Partners as Entrepreneur in Residence. He also formed the non-profit social organization Juno to expand the ideas and influence of social networking to less developed areas around the world. Hughes joined the UNAIDS program in 2010 to help the organization develop social media programs to prevent the spread of HIV-AIDS.

In 2012, Chris Hughes followed his educational training and bought the liberal political magazine The New Republic. He is now the publisher and editor-in-chief of the magazine.

Chris Hughes has identified himself as a proud member of the LGBTQ community since his days at prep school. He is married to Sean Eldridge, an activist with the Freedom to Marry organization and who also recently ran for political office. Together, they are a significant force in political circles and the literary world.