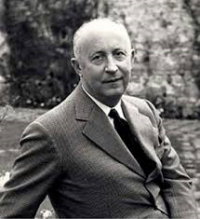 Christian Dior, one of the most recognized names in fashion design, created the haute-couture fashion industry that we know today. He introduced a new look in women’s wear that celebrated femininity after years of shortages and conservatism imposed by successive world wars.

Though he, too, began his adult life within the confines of the military, he briefly studied design as a career starting in 1935. Dior returned to the profession in the middle of World War II when Paris was under German occupation. He opened his own fashion house in 1946 after a brief stint working for others. Dior’s unique fashions were instantly declared ‘the New Look’ for their ability to capture the silhouette of the woman’s body. The opulence of his designs contrasted sharply with the usual grim post-war looks and they were a rebuttal to the fabric restrictions of the time because of the length of the dress. His instant success lifted the spirits of women around the world and quickly returned Paris to the acknowledged fashion capital of the world.

Dior is particularly noted as the innovator who introduced the business concept of licensing agreements to market both his name and fashion styles around the world. This unique concept not only generated significant business revenue for the House of Dior, it also introduced a more structured and formal organizational approach to the operations of the haute couture industry. Dior extended licensing agreements to furs, stockings, ties, perfumes, jewelry, scarves, gloves, perfumes, ready-to-wear clothing, and much more to manufacturers around the world. This had the effect of creating a global brand identity for Christian Dior – suddenly there was value to his name alone. In essence, today’s global companies have adopted this business structure from the ideas of Christian Dior.

Each successive design of Christian Dior was themed and named using a marketing strategy. Examples of these include ‘Carolle’, ‘Tulip’, the ‘H Line’, the ‘Y Line’, and the ‘A Line’ (where designs resembled a capital H, Y, or A). This was a brand management and marketing strategy that ensured consistency and marketing ability on a global scale. As a result, Christian Dior became a household name around the world. He commercialized Parisian fashion to compete with national brands in all countries.

This global branding strategy allowed Dior to become a dictator of fashion in the industry for the next decade. His constant reinvention created its own sales and marketing turnover, while his manufacturing agreements allowed for rapid productions and sales. This introduced to the fashion industry the new notion of ‘trends’. Because he developed the complete look for his customers (as noted above), he was able to capture more of the spending dollar of each consumer.

Christian Dior died unexpectedly in 1957 of a heart attack. However, because of the organizational structure he had created, his fashion house continued to survive and flourish. Yves Saint Laurent was quickly appointed artistic director of the firm.

Although Christian Dior did not hide his homosexuality, he was also very conservative in nature and pragmatic in his private relationships. He preferred to focus on his business enterprise. Dior made no public comments on the matter and makes only brief references to his sexuality in his autobiography. Rumours continue to survive that his heart attack came after an intense sexual encounter, but there is no definite proof of this.

The fact he remained private is a reflection of both the man and the society he lived in. His success is reflected in the ongoing adoption of his business strategies, and the favour his fashion house continues to receive today.