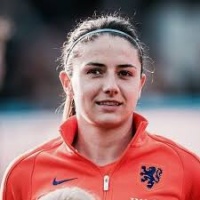 Professional football (soccer) player who plays for Arsenal in the FA WSL since 2015 and is a member of the Dutch national football team since 2010. Appointed a Knight of the Orange-Nassau in 2017 after the national team won the European women's championship. Partner is fellow football/soccer player Bethany Mead.