Difference between revisions of "Dominique Fernandez" 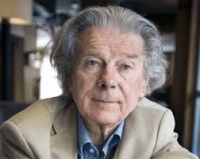 Author of Novels and travel books. His writing explores issues of homosexuality. In 1982 he won the Prix Goncourt for his novel about Pier Paolo Pasolini, his prose work dans la main de l’Ange, and in 2007 he was elected a member of the Académie française. Professor of French at the Institute Francais (1957-58) and Professor of Italian at the University of Haute-Bretagne (1966-1989). Literary critic for L'Express (1959-1984) and music critic for Nouvelle review française, Diapason (1977-85) and Monde de la musique, Operat International (1978).