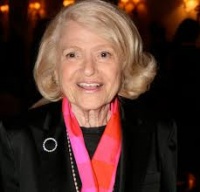 Known affectionately as Edie Windsor, LGBTQ activist who, on the death of her wife Thea Spyer and facing an IRS estate tax bill that would not have applied if the U.S. government recognized same-sex marriage, took the U.S. government to the Supreme Court and won (represented by lawyer Roberta Kaplan and co-counsel American Civil Liberties Union). Lead to the overturn of the Defense of Marriage Act (DOMA) and recognition of same-sex marriages under the U.S. constitution. Married in Canada by Justice Harvey Brownstone after Thea's deterioration from multiple sclerosis. Their lives were the subject of a documentary, 'Edie and Thea: A very long engagement' (2009). Career employment with IBM Corporation as a computer engineer. Active in the LGBTQ community, and recipient of many awards.