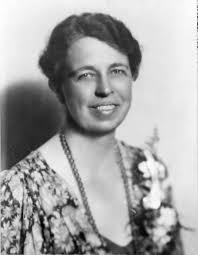 Wife and First Lady to President Franklin D. Roosevelt, Eleanor Roosevelt was an active and powerful human rights campaigner. Her political connections and international stature guaranteed her influence on such issues as civil rights, children’s health and education, women’s rights, the unemployed, peace, and more.

Eleanor was brought up without the influence of her parents when they died at her age of ten. This was a situation which deeply affected Eleanor throughout her life. The experience often left her lonely and depressed at many times. Nevertheless, the experience also made her independent and strong-willed on issues she cared deeply about. Later, she attended junior school in London, England, another instance of independence building.

Eleanor and Franklin were married in 1905. Although they had six children, Eleanor always commented on the fact that she was not a good mother and disdained sex. Early on, she took up her activism on women’s rights and child labour. She helped her husband win the Governorship of New York State in 1928, followed by his successful campaign to be President in 1932.

Eleanor Roosevelt immediately began to make her mark as an independent First Lady by expanding her rights activism. She was the first in her position to hold regular press conferences, and she wrote syndicated columns for newspapers. She was particularly outspoken on the need for civil rights in the country, and she frequently invited black Americans to the White House. In addition, she actively supported the League of Women Voters.

With the onset of World War II, Eleanor Roosevelt turned her attention to issues of refugees, civilian volunteers, troop morale, the fate of the Jews, and working women in munitions factories.

After the end of Franklin D. Roosevelt’s second term in office, Eleanor was appointed a delegate to the United Nations in 1945 and stayed until 1953. She became the first United Nations Commissioner on Human Rights in 1946 and helped draft its Declaration on Human Rights. She continued her activism for women’s rights and civil rights, lobbying for the passage of many pieces of legislations to advance them.

Eleanor Roosevelt maintained a heavy regimen of writing. She published four books: This Is My Story (1937), This I Remember (1945), On My Own (1958), and Autobiography (1961). After this last book, she was again appointed a delegate to the United Nations, and became Chair of the Commission on the Status of Women. Eleanor Roosevelt succumbed to cancer in 1962, at which time she was praised for a life of great humanitarianism.

Though Eleanor Roosevelt did not reveal her sexual attraction to women during her public and active life, there were two noteworthy female relationships she was involved in. The first was with Amelia Earhart (though the sexual nature of this is surmised). The more long-lasting and relevant one was with Lorena Hickok, a reporter with the Associated Press. Eleanor wrote daily letters to her that were between 10-15 pages each and totaled over 3,500 pages. The affair was so close that Hickok resigned her reporting duties to avoid conflict of interest. The letters are in the archives of the University of Illinois, whose research conclusions affirm the lesbian relationship. The extent of sexual relations can only be surmised, but it confirmed that after Franklin D. Roosevelt’s extra-marital relationship was exposed, Hickok and Eleanor’s flourished. Hickok herself had no qualms about her sexual identity.

Would the public’s direct knowledge of a lesbian First Lady have made a difference? Certainly, it would have in terms of the public acceptance concerning LGBTQ visibility and rights. Roosevelt’s ability to influence the progress of a broad range of human rights issues through national and international government institutions would have been restrained. However, it is doubtful that would have affected Eleanor Roosevelt’s personal devotion to human rights.