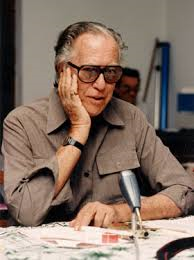 Considered the most important Asian architect of the 20th century, Geoffrey Bawa is credited with creating the new Tropical Modern aesthetic that is now common throughout the world. This style of architecture seamlessly combines the indoor with the outdoor, being minimalist in composition and creating semi-enclosed spaces. His buildings are constructed of indigenous local materials and crafts, borrowing from the native forms with an emphasis on efficiency. Bawa’s buildings are contemporary in design but rooted in local tradition. Bawa is considered the most influential architect from the Asian region.

Born in 1919, Geoffrey Bawa studied at Cambridge University before moving on to study law in London. After serving in the war, Bawa returned to his native Sri Lanka, purchased an abandoned rubber estate, and converted it into one of the country's most iconic gardens and estates. He then returned to London to study architecture, qualifying in 1957.

Between 1957 and 1989, Geoffrey Bawa took charge of the established Sri Lankan architectural firm Edwards Reid and Begg. He left in 1990 to create his own firm, Geoffrey Bawa Associates. Throughout, Bawa developed and refined a new style of modernist architecture suitable to the tropical climates.

Bawa began by designing and supervising the construction of residential properties, office buildings, churches, and schools. He is noted for deconstructing the traditional layout of constituent rooms by creating semi-enclosed spaces which include terraces, garden rooms, garden roofs, and courtyards. His office buildings addressed the particular needs of the workplace in a tropical environment, including cantilevered floors and breathing walls.

Bawa's most iconic building was the new Sri Lankan parliamentary buildings constructed in 1979. It was designed as an island capital surrounded by parkland and a new lake. The building itself is a main pavilion surrounded and connected by five satellite pavilions. This is one of Bawa's most revered and praised buildings today.

A significant number of international awards and honors have been bestowed on Bawa. He is an honorary fellow of the American Institute of Architects, received the Architect of the Year in London (1996), the Aga Khan Award For Architecture for lifetime achievement (2001), and many more. His work has often been the subject of retrospectives around the world. Unfortunately, he was felled by a stroke in 1998 that ended his productive career, and he passed away in 2003.

His influence on global architecture is undeniable. Firstly, he tutored and mentor subsequent generations of prominent modernist architects. His work is highly regarded in many countries, including Singapore, Japan, Thailand, and India. Today, the Geoffrey Bawa Trust administers his estate, provides scholarships and lectures, and presents architecture awards.

Geoffrey Bawa was considered eccentric because of his homosexual lifestyle. Elements of this easily transferred to his design, particularly in the garden elements – they are very decorative and eclectic, incorporating an English aspect into the traditional tropical landscape. These included the creation of vistas and walkways that were sensual, but also which are filled with wonder and gay in-jokes along the way (including male nudes and sculpture, or a sleeping naked man etched into a concrete bench). His brother, Bevis Bawa, was also gay and served as Aide de Campe for four successive Sri Lankan Governor Generals.