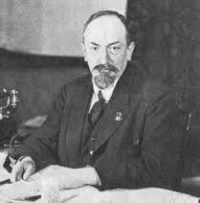 Wealthy businessman who supported the Russian Revolution, and who became Foreign Affairs Minister (1918-1930). Lived in exile in England prior to the revolution and was jailed there for anti-war writings, but was released under the influence of Leon Trotsky and in exchange for the British ambassador, and he returned to the new Russia. Post war, he collaborated with Germany to ensure peace for Russia in the development of its post-revolution state.