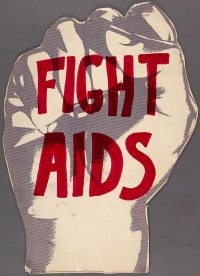 The HIV/AIDS crisis has been a primary issue for the LGBTQ community from the late twentieth century to today. While it is a challenging one on many fronts, it has been embraced by the LGBTQ community as an important and defining part of its history that led to further refinements and sophistication of its collective activism.

The momentum forward in LGBTQ activism would face a major stumbling block in the 1980s: the emergence of an unusual and hitherto unknown aggressive form of cancer detected particularly in the gay community. By September 1982, the CDC had adopted the name Acquired Immune Deficiency Syndrome (AIDS) as a label for this cancerous disease for which the patients all appeared to have no likelihood of resistance. Given the exponential rate of increase in reports of the disease and deaths of patients, the CDC in conjunction with the National Institutes of Health and a few LGBTQ health organizations (including New York’s Gay Men’s Health Crisis (GMHC) founded by writer and activist Larry Kramer in June) began more active and funded programs to warn LGBTQ individuals about the dangers posed to the community.

The fear amongst health workers (and other organizations such as police, firefighters, and funeral homes) to admit and properly treat victims of the disease led LGBTQ community activists to establish stand-alone AIDS clinics and chronic disease treatment centres around the world. The first of such was in 1982 when the Bailey-Boushay House in Seattle, Washington opened. Other countries followed suit, such as Australia with St. Vincent’s (1983), England with London Lighthouse (1986), Canada with Casey House (1988), and Scotland with Waverly Care (1989).

By the end of 1985, there were 20,303 cases worldwide reported to the World Health Organization. This grew to 71,750 cases by the end of 1987. At this stage, AIDS had become identified as a ‘gay disease’ and homophobia escalated. Thus began a series of more publicly visible actions by the LGBTQ community around the disease.

The momentum for this increased activism by the LGBTQ community was driven, in part, by the death around the world by AIDS of many high profile artists, writers, entertainers, and others, such as that of actor Rock Hudson in 1985 (he bequested $250,000 to formally establish the American Foundation for Aids Research (AMFAR)). Indeed, Rock Hudson’s death marked the turning point in government funding for AIDS research. It also marked the point at which straight allies joined the movement, such as Princess Diana of Great Britain and actor Elizabeth Taylor.

At that point, the general public began to relate to AIDS patients on an emotional and personal level. Rather than narrowly identifying AIDS patients as LGBTQ, the public began to relate to the patient as a human being. Public awareness and concern for the disease skyrocketed around the world. Politicians moved the AIDS issue to the top of the agenda on health and wellness issues.

AIDS activist Cleve Jones in the United States began the high-profile AIDS Memorial Quilt in 1986 wherein each panel of a quilt would memorialize an individual lost to AIDS. Some New York activists (led again by Larry Kramer) in 1987 formed a new organization called ACT UP (AIDS Coalition to Unleash Power) to employ more direct action tactics to press for concrete plans to attack the disease and counter the homophobia it was generating. Identically named, or similar, organizations were formed in Paris, London (including Terrence Higgins Trust (1982), Stonewall (1989), OutRage (1990)), and Berlin. The notion was to transition the community from its portrayal as disease ‘victims’ into activist ‘experts’.

The first International AIDS Conference was held in Montreal in 1989, being a mix of activists and scientific medical practitioners. Today, medical advances have changed the AIDS disease from a death-sentence to a chronic illness in the developed world.

The concerns have shifted to its impact on the less-developed world, notably Africa and Asia. Notable LGBTQ activist organizations have been formed in these regions to address the same issues faced by western countries in the early stages of the disease. For example, Shivananda Khan founded the Asia Pacific Coalition on Male Sexual Health (APCOM) in the early 1990s to bring together governments, the United Nations organization, and civil society to address the health and social development agenda for the Asia and Pacific region on the issue of HIV-AIDS.

We have identified many individuals from around the world, both historical and contemporary, who have played or continue to play important roles in HIV/AIDS activism. Simply click on their names to read their fascinating biographies.