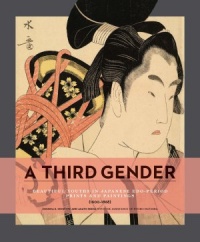 The blockbuster museum exhibition A Third Gender made its debut in New York City at the Japanese Society. The exhibit runs from March 10th to June 17th, 2017.

This ground-breaking showing recently wrapped up at the Royal Ontario Museum (ROM) in Toronto, Canada with over 150,000 visitors during its six month run. Featuring stunning woodblock prints, samurai armor, a kimono, screen paintings, lacquerwork, and illustrated books, the exhibition explores issues of gender and tells a pivotal story of sexuality in Japan’s Edo period (1603–1868).

The Mark S. Bonham Centre for Sexual Diversity Studies at the University of Toronto is pleased to have partnered in this exhibition.

A Third Gender is the first North American display on wakashu. Four hundred years ago in Japan, a complex social structure existed in which gender involved more than a person’s biological sex. Age, position in the sexual hierarchy, and appearance were also considered. Fundamental to this structure were youths termed wakashu. Neither ‘adult man’ nor ‘woman’ —each a separate gender — wakashu were objects of desire for both, playing distinct social and sexual roles. Constituting a third gender, they are visually represented in these Edo period woodblock prints.

The exhibition features approximately 60 woodblock prints (ukiyo-e), visually representing wakashu. Many never before displayed, they are from the ROM’s Japanese art collection—the largest in Canada. Produced since the 8th century in Japan, woodblock prints, created collaboratively by a designer, engraver, printer, and publisher, became popular in the 17th century. The exhibition’s prints were created in early 18th to mid-19th centuries by major ukiyo-e masters including Okumura Masanobu, Suzuki Harunobu, and Kitagawa Utamaro.

The exhibition has received rave reviews in the New York Times. See HERE for the review. Accompanying the review is a brilliant video of the exhibition.