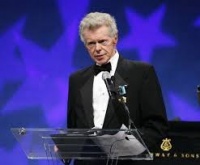 Classical pianist. Won the first Tchaikovsky International Piano Competition at the height of the Cold War and became an instant pop culture celebrity, being the only musician to receive a ticker-tape parade when he returned to the United States. Renowned player of Chopin, Tchaikovsky piano pieces. Received the Kennedy Center Honors in 2001. Awarded the Presidential Medal of Freedom in 2003, and in 2004 was given the Russian Order of Friendship, the highest civilian awards of the two countries. Published his memoire in 1999, 'The Times of My Life and My Life With The Times'.