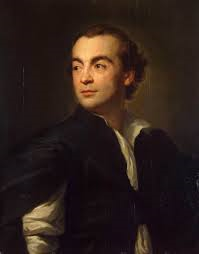 An art historian and founder of the scientific field of study called Archeology, Johann Winckelmann had great influence on the development of the study of ancient painting, sculpture, and other art through excavation. Much of his writings on these subjects were the first in the field and are considered classics.

Winckelmann was born into poverty but his insistence on learning propelled him into higher levels of education. He took a particularly keen interest in art history and ancient Greek literature. To get himself through school he became a tutor and taught languages. In this role, he is noted for his first intimate relationship with a student, Peter Lamprecht, because it propelled him to further study Greek and Roman sculpture.

In 1748 Winckelmann became the librarian for the nobleman Count Heinrich von Bunau and his 40,000 volume library. This allowed him to read and study the classical Greek scholars and current philosophers of his time.

Winckelmann’s first essay about Greek art was highly praised. Published in 1755, Thoughts on the Imitation of Greek Works introduced his thoughts and approach to the study of art history. In it, he expresses the view that the Greek ideal was a noble simplicity and quiet grandeur that deserved replication. This essay made Winckelmann famous and set the precedent for the evaluation and interpretation of Greek art ever since.

To get access to Rome and its vast treasure of art and literature, Winckelmann converted to Catholicism as a convenience. He travelled to Rome in 1755 to further his research. He served as librarian to two successive Cardinals. He befriended the painter Raphael, who introduced him to artistic circles. Winckelmann had many amorous affairs with young men and his homosexuality was an open secret, as confirmed in his vast correspondence. This explains his sanctioning of homoeroticism in art through the ages, and he often stressed the beauty of the male body in ancient sculpture.

Winckelmann attended to the excavation of Pompeii and Herculaneum as these sites were discovered in 1762. Through his writings, he made them known and famous throughout the world. Importantly, he proposed more efficient methods of excavation. Through the application of scientific methods he created the new field of study called Archeology (formerly a pursuit of the leisure class) to be studied at higher degrees of education.

His masterwork was the book The History of Art in Antiquity (1764). This book is now considered a classic of European literature and a contributor to the renaissance as it related to the study of history. The book presents a new and systematic basis for the study of this subject matter, including a chronological account of all antique art up to that time. It is the first work which studied the evolution of art and tastes through generations, including the analysis of the influence on art of culture, politics, craftsmanship and skill, the intellectual environment, and more. To Winckelmann, an artistic masterpiece represents the talent and imagination of the artist expressed within the confines of his or her’s societal structures. His work was the first to divide art into historical periods.

On a trip back from Vienna, Winckelmann was stabbed to death by a common thief in Trieste at the young age of 51.

Was his motivation and work influenced by his homosexuality? Without a doubt, and Winckelmann was not shy in admitting this. He believed that his love for a man allowed him to better analyze and interpret the art world that preceded him because much of that art expressed feelings toward inner beauty, particularly of the male body. Winckelmann believed his imagination coincided with that of the artists themselves. His descriptive enthusiasm and vivid detail of historical art was widely embraced. His work was the start of a new epoch in researching art and aesthetic values using scientific terms and methods.