Difference between revisions of "Julia Turshen" 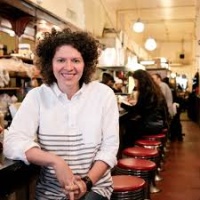 Cookbook author. Books include 'Now & Again' (named the Best Cookbook of 2018 by Amazon and an NPR ‘Great Read’), 'Feed the Resistance' (named the Best Cookbook of 2017 by Eater), and 'Small Victories' (named one of the Best Cookbooks of 2016 by the New York Times and NPR). Hosts the IACP-nominated podcast called ‘Keep Calm and Cook On.’ Member of the Kitchen Cabinet Advisory Board for the Smithsonian’s National Museum of American History. Founder of Equity At The Table (EATT), an inclusive digital directory of women and non-binary individuals in food.