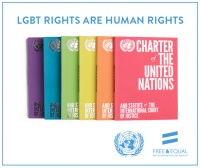 UN Globe is the LGBTQ staff organization that fights for the equality and non-discrimination of all UN staff and peacekeeping officers.

To this end, we have identified numerous LGBTQ individuals who are, or have been, active participants at the UN. These include member-country Ambassadors, activists, Goodwill Ambassadors, experts on HIV/AIDS issues, and more. They hail from New Zealand, Brazil, Vietnam, Finland, Great Britain, China, Syria, Canada, the United States, Romania, Thailand, Israel, Australia, the Philippines, Spain, Sweden, India, and Mexico. Read their fascinating biographies below: