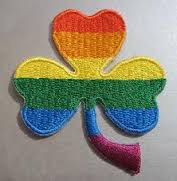 The Republic of Ireland became the first country in the world to approve same-sex marriage by referendum when a vote was taken in May 2015 and passed with 62% in favour. Whether you agree that minority rights should be determined by plebescite or not, the outcome was a win for the LGBTQ community and the country itself. This is all the more welcome given the traditional conservative, Catholic characteristics of Ireland.

The historic event in the Republic of Ireland has put pressure on Northern Ireland to follow suit.

However, if you look at the history of the LGBTQ community in Ireland as a whole, it is perhaps less surprising an outcome. The annotated existence, and often acceptance, of notable LGBTQ individuals goes back to the mid-1600's. For example, most Irish know well the story of lesbians Sarah Ponsonby (1755-1831) and Lady Eleanor Butler (1739-1829), affectionately called the Ladies of Llangollen, in poems and stories as they became social luminaries of their time.

Before the 2015 vote there was a vibrant and active LGBTQ community consisting of out politicians, entertainment personalities, writers, poets, sports personalities, painters, singers, religious leaders, and more. True, they often recounted the usual travails of being a homosexual minority subject to taunts and bullying - but the vote shows that the instigators were in the minority.

How well do you know this history?

Read on for more fascinating biographies of this unique culture that has shaped the world, including the LGBTQ community: