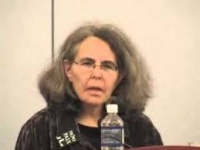 Feminist and activist who commented on the state of antisemitism and the Middle East. Founding director for Jews for Racial and Economic Justice (JFREJ), a progressive Jewish organization focused mostly on anti-racist work and issues of economic justice. Served on the steering committee of New Jewish Agenda. Taught women's studies course at the University of California, Berkeley. Books include the poetry book 'We Speak in Code', and the books 'The Issue is Power: Essays on Women, Jews, Violence, and Resistance' (1992) and 'The Colors of Jews' (2007).