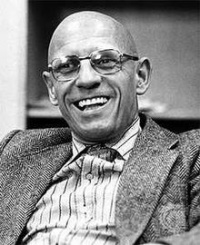 Michel Foucault was a contemporary philosopher and social theorist whose work underpins the study of marginalized populations within the larger political and social landscape. This includes, of course, the LGBTQ community. His work explores such issues as the relationship between power and knowledge, how words can shape perception, how society distinguishes between normal and abnormal, and how all of this plays into human rights and freedoms.

Foucault’s early education in secondary school was already focussed on the study of philosophy, contrary to his father’s wishes that he become a surgeon. He followed this up with post-secondary work in philosophy at the prestigious Ecole Normale Superiore in Paris.

Upon graduation, Foucault worked as a philosophy instructor before becoming a cultural diplomat at the University of Uppsala in Sweden followed by a similar position in Warsaw, Poland. It was here that he finished his doctoral thesis on the history of madness, a subject matter that reflected his taste for the macabre.

After receiving his doctorate, Foucault began teaching philosophy in France, followed by a position in Tunis when his lover at the time was posted to that country. He eventually settled at the College de France. It was here that he published his most significant work, the History of Sexuality: The Will to Knowledge (1976). This is the work in which he introduces his discussion on power, and in particular, how society exerts power to achieve socially acceptable outcomes. This, he argues, occurs through a process of categorizing and normalizing human behavior to obtain routines and practices that meet desired outcomes.

There are a number of influences that shaped Foucault’s thoughts and theories on the process by which society defines normative behaviour and the various power relations within a society. Firstly, because Foucault practiced his homosexuality openly, he was shocked with the degree of homophobia he faced in all aspects of his life, often comparing it to the discrimination inflicted upon the Jews. Moreover, he was open to diversity in his sexuality: he had a number of intimate relationships with colleagues and other men, and some of these relationships involved sadomasochistic sexual activity. Secondly, he was also a political activist during this time with a focus on human rights. He was heavily influenced towards activism by his long-time lover Daniel Defert. Combined, these experiences compelled him to analyse social relationships, comparing the evolution of two extreme forms of behaviour that represented the acceptable and unacceptable.

Foucault began analyzing the power of words, not only in terms of how they are used in a descriptive sense, but also in terms of how they convey power and reinforce relationships. He examined these workings in the context of medicine, science, literature, the arts, and politics. Throughout, his goal was to understand the mechanisms a society uses to ensure homogeneity, and the basic rules of interaction between individuals which determines what is right and what is wrong.

That his own homosexuality influenced his work is beyond debate. His homosexuality was well known, and the tortured life of a homosexual (Foucault attempted suicide at one point because of his difficulty accepting his homosexuality) would naturally fit into the context of his theories. Specifically, Foucault showed how a society, such as the Victorian, attempted to regulate sexuality by framing discussion of it in moralistic terms: good versus bad; acceptable versus subversive; heterosexual versus homosexual.

Foucault’s groundbreaking work laid the philosophical foundations of future LGBTQ literary work and human rights activism. By situating the LGBTQ community in the context of power relationships, Foucault encourages current and future LGBTQ generations to represent their history and their fight for equal rights as a struggle which all discriminated and marginalized groups experience as they challenge concepts of normative behaviour.

Foucault’s death, by AIDS, represented one of the first high profile intellectuals to die from the illness. Nevertheless his groundbreaking theoretical work continues to inform and instruct the LGBTQ.