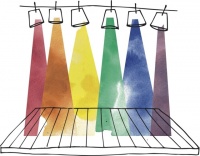 The LGBTQ community has been so prominent in the dance profession that it is now considered a stereotype that all male dancers are gay. Of course, this is not true, but it does reflect the important role the community has played in the history of dance. Included among this contribution is dance choreographers. This contribution by prominent LGBTQ choreographers covers a wide spectrum of dance styles and mediums, including ballet, sports presentations, contemporary, film, television, theatre, performance art, and more.

Many LGBTQ choreographers are founders of prominent dance companies. These include Americans Robert Joffrey of Joffrey Ballet and Alvin Ailey of Alvin Ailey Dance Studio, New Zealander Alexander Grant of Sadler Wells Ballet, and Great Britain's Matthew Bourne among others. Many have received recognition for their contribution to the profession through the receipt of honours and awards such as Tony Awards, Emmy Awards, the Pulitzer Prize, and national honours.

A prominent outlet for LGBTQ choreographers today is with the production of reality television dance shows 'You Think You Can Dance', 'Dancing With the Stars', 'La Meilleure Danse' and 'Strictly Come Dancing'. Despite this presence, there remains a lack of same-sex competitors in these shows which has stirred up considerable and controversial opinions.

We have identified the following notable LGBTQ dance choreographers. Simply click on their names to read their fascinating biographies: