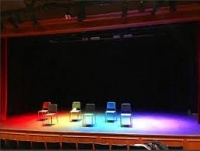 In the majority of cases, the subject matter of the written material reflects the LGBTQ community, its challenges and its successes. Activism is a dominant theme, and both the play and the stage is the medium through which many playwrights participate in activism. In some countries, this means that the playwright is politically marginalized or treated as an outcast by the ruling government despite their popular admiration and acceptance. The play is used as a means to express opinions and facts on issues such as feminism, discrimination, love, sexual identity, political repression, race, cultural identity, and more.

Plays can reflect the issues within the LGBTQ community itself. The most prominent example of this is the AIDS epidemic - its impact on the theatre world and inclusion in the written work.

Depictions of same sex attractions and relationships in plays predates any legislative changes in countries that decriminalized such activity or enshrined LGBTQ rights. Homosexuality and the theatre have not been strangers. Theatre has often been a means to liberate an individual from their social and religious confines, even for only a short period of time. Like film, theatre can temporarily transport an individual to their ideal world of tolerance and acceptance in the realm of love and desire. As laws do change, theatre itself becomes more assertive on the presentation of sexual orientation, and playwrights themselves become more comfortable with their own public sexual identity.

These playwrights cover the range of genres in the theatre world: musical, drama, comedy, and documentary. There is a wide variety of subjects, artistic approaches and experiences conveyed.

Many of these playwrights have received local and national awards for their work, including Tony Awards, Pulitzer Prizes, Obie Awards, Emmy Awards, Olivier Awards, and others. Playwrights themselves have received national honours from their home countries. As well, many of these LGBTQ individuals have made their mark in other popular entertainment pursuits, such as writing books and making films or as screenwriters for those films.

The exciting aspect of this profession is the continuing emergence of new playwrights. Too numerous to list here, these talented individuals tend to be more local in their work and presence while gaining significant reputations within their community. They are often nurtured by local LGBTQ theatres with a supportive patron base. With success and an accepting profession, these individuals smoothly graduate to the mainstream theatre world.