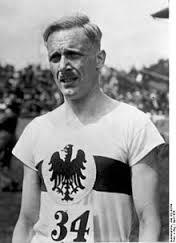 Persecuted Olympic long distance runner, imprisoned by the Nazis for his homosexuality even though he had joined the Nazi Party. First known LGBTQ Olympic competitor, competing in the 1928 and 1932 Olympic games as team captain. Held world records in the 800m, 1,000m, and 1,500m races. Emigrated to India to coach the Indian running team. Author of the book `Athletics` (1929).