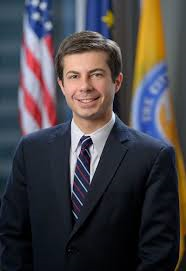 Mayor of South Bend, Indiana since 2011. Rhodes Scholar. Former management consultant. Served for seven months in Afghanistan as a lieutenant in the US Navy Reserves. Unsuccessfully ran for the Chair of the Democratic National Committee (2017). Announced he would run as a candidate for the Democratic Party in the 2020 Presidential campaign. Also known as Pete Buttigieg.