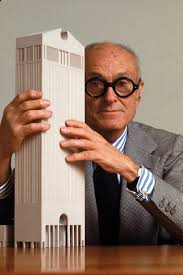 One of the most recognizable faces in architecture, noted for his glass and steel office towers, often described as flamboyant and artificial. Teacher at Yale University. First director of the Museum of Modern Art's architecture department. Notable works include the AT&T building in New York City, his 'Glass House', and the Crystal Cathedral in California.