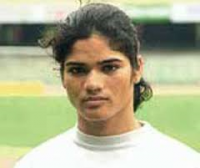 Intersex track athlete, notable for her medal-winning performances in the 400 and 800 metre track races at the 2006 Commonwealth Games (silver), 2006 Asian Games (gold), the 2005 Asian Indoor Games (gold), and the 2006 South Asian Games (3 gold). Was embroiled in controversy when she was accused of being male, though subsequent tests confirmed that she was intersex.