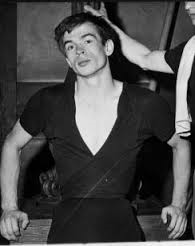 Rudolf Nureyev was one of the most gifted ballet and modern dancers of all time. His artistic and technical skills in his craft were beyond any of those of previous male dancers. He used his skills to create a new, more central role for the male ballet dancer. In the process, he also changed the expectations of the ballet audience.

Nureyev began dancing as a child in Siberia, Russia where his skills were immediately recognized and encouraged. After World War II he enrolled in the Leningrad Ballet School, part of the Kiev Ballet School. From the beginning he was noted for his strong personality, verging on arrogance.

He was an immediate star in his home country, but he was advised that he would not be allowed to travel internationally due to a fear he may defect to the West. Nevertheless, a fortuitous injury by another dancer created the opportunity for him to travel to Paris in 1961, and his resulting performances were electrifying.

The Russian KGB’s worst fears were realized when he defected in Paris. Nureyev immediately joined the Grands Ballets du Marquis de Cuevas as a principal dancer. In 1965 he signed on with the Royal Ballet in London as Principal Dancer and partnering with the great ballerina Dame Margot Fonteyn – a historic partnership that would last decades. It was only in 1983 that Nureyev left the Royal Ballet to become Director of the Paris Opera Ballet to great success. He remained there until his retirement.

Rudolf Nureyev was a strong central character both in his personality and in his stage presence. This was in a ballet world which relegated the male dancer to the background and with the ballerinas expected to take centre stage. Nureyev refused to take such a subsidiary role, instead using the force of his personality and dancing style to take the spotlight. The result was a complete change in the perception of male dancers in ballet.

Nureyev continued this effort when he became a choreographer or when he partnered with other prominent choreographers on new pieces. These partnerships included the renowned Sir Frederick Ashton, Kenneth MacMillan, and Eva Evdohimova. His signature dance pieces became Romeo and Juliet, Les Sylphides, Swan Lake, and Sleeping Beauty.

Another important innovation introduced to ballet by Nureyev was the blending of modern dance movement into traditional ballet. His collaboration with modern dancer and choreographer Martha Graham is well known for setting new stylistic and presentation parameters.

Rudolf Nureyev was known publicly as a homosexual throughout his life. Shortly after his defection he began a long-term intimate relationship with Erik Bruhn, a soloist of the Royal Danish Ballet. This relationship lasted until Bruhn’s death in 1986, with several periods of separation. The sheer force of Nureyev’s personality was such that he had no qualms whatsoever with his sexual orientation. He lived a high profile life among celebrities and high society around the world, gaining the nickname ‘the Wild Thing’.

Regrettably, it is these same-sex relationships that ultimately caused his death. Although he tested positive for AIDS in 1984, he refused to acknowledge the potential seriousness of the disease. Nureyev managed to live with AIDS until signs of weakness appeared in 1992. He passed away from AIDS complications in 1993 at the young age of 54.

Rudolf Nureyev is another paradoxical LGBTQ individual. Although he had a very strong personality which allowed him to be completely open about his sexuality, he also relied on two very close and personal relationships throughout his life – that with Erik Bruhn and Dame Margot Fonteyn. To these individuals he retained a lifelong devotion, and they in turn affected him deeply. In both cases he used his traits of determination and stubbornness to seek out the relationship and cement them for good. Though he was ruled by narcissism, he knew the value of true friendship and love.