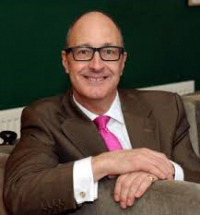 Writer, and television and radio broadcaster. Winner of the Perrier Award (1989) for the television show 'That's Life'. Contributor to numerous magazines and newspapers, including The Guardian, The Sunday Times, and Time Out. Notable for his documentary production of 'The Trouble With Gay Men' (2006). Chair of Council, University of Sussex (2007-2013). One of the founders of Stonewall, the largest LGBTQ organization in Europe. Board Member, Kaleidoscope Trust, an LGBTQ rights organization.