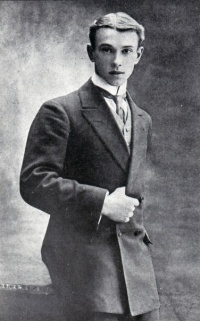 Vaslav Nijinsky was the original Russian ballet superstar and choreographer. He is generally considered the most gifted male dancer in history. In his choreography, Nijinsky introduced the world to a new kind of modern ballet dancing that showed off his personal virtuosity and breakthrough style of male dancing. It was so revolutionary at the time it literally caused riots in the great ballet halls of Europe.

Nijinsky began his dance training when he entered the Imperial Theatrical School at the age of nine. Although he was poor at most school subjects, his skill at dancing was immediately recognized. On his graduation at the age of eighteen he was taken into St. Petersburg’s Imperial Ballet.

At the time, it was not unusual for ballet dancers to accept fees from wealthy patrons for sexual trade. Nijinsky entered into this type of arrangement with Prince Lvov, marking his first homosexual experience. When Lvov tired of him, Nijinsky paired up with the great Russian dance promoter (and homosexual) Sergey Diaghilev. This would be the relationship that vaulted Nijinsky into international stardom.

In 1909, Diaghilev featured Nijinsky and the great Anna Pavlova as the stars of the new Ballets Russes during a Paris tour of ballet. The tour was an overwhelming success. Nijinsky was regarded as a dancer of unprecedented virtuosity. The audience let out literal gasps as they witnessed artistic dance moves they had never before seen a male dancer accomplish.

It also helped that Nijinsky lived openly as a homosexual at this time and was the partner of Diaghilev. The relationship itself created an immense public stir amid elements of scandal that guaranteed headlines. Nijinsky’s roles were choreographed as highly sexual, including the costuming, and this all combined to create an aura of mystery and awe that continually surrounded him.

At this early stage, Diaghilev encouraged Nijinsky to choreograph new pieces for the Ballets Russes. These new ballets were highly sexual in nature and unlike any other ballet seen before. The new approach became known as modernism, and included sharp, spectacular movements with angular motion that expressed hard emotion. The Nijinsky ballets that received particular attention at the time included The Afternoon of a Faun, Jeux, and The Rite of Spring. The ballets caused such an uproar that the police had to be called in when the audience started to riot.

It was shortly thereafter that Nijinsky began to show signs of mental instability. In a solo trip to South America without the presence of Diaghilev, he was seduced by a wealthy Hungarian, Romola de Pulszky, and the world was shocked when they announced their marriage. The psychological stress on Nijinsky was building, and within five years he was committed to a hospital for the insane.

In the interim, he did a number of dance performances, including a short-lived reunion with Diaghilev, that were all considered disastrous. Nijinsky even attempted to establish his own company with no success, and an American tour was poorly managed and presented.

During the last stages of his life before hospitalization, Nijinsky began writing extensive daily journals. These were discovered many years later, and only in 1999 were unexpurgated versions published that revealed the extent of the decline in his mental health. Nijinsky spent the remaining 30 years of his life in psychiatric hospitals.

While Nijinsky portrayed a strong sensual role on stage, in life his personality was that of a shy, introverted individual who lacked confidence in his social surroundings and relationships. This was a situation ripe for a talented individual to be taken advantage of. His homosexual relationships were a reflection of his desire for personal and emotional support. Despite possessing immense talent, many homosexuals are abused by, or marginalized in society.