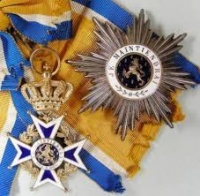 We have identified a number of LGBTQ individuals who have been appointed members of the Order of Orange-Nassau. To read more and see the complete list, click HERE