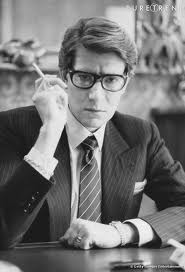 Fashion designer, art collector, and aids activist. Started as head designer of fashion house Christian Dior SA at age 21 and is credited with saving it from financial ruin. After being conscripted into the French Army, he was fired by Dior, sued for wrongful dismissal, and won. Started up his own fashion house with his partner in business and life, Pierre Berge. Noted for his pret-a-porter line (ready to wear). Created a charitable foundation.