Difference between revisions of "Alphonso David" 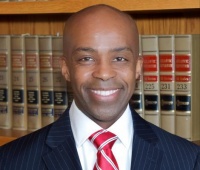 President of Human Rights Campaign from 2019 to 2021, being the first black gay man to hold the position. Dismissed by the Board after an investigation into conflicts of interest. Civil rights lawyer and Adjunct Professor of Law, Yeshiva University where he teaches Constitutional Law: Sexuality and the Law. First openly gay Counsel to the Governor of the State of New York (2015-2019). Served in the New York Governor’s cabinet as the Deputy Secretary and Counsel for Civil Rights, the first position of its kind in New York State (2011-2015). Previously served as Special Deputy Attorney General for Civil Rights for the Office of the New York State Attorney General. Former staff attorney at the Lambda Legal Defense and Educational Fund.