Difference between revisions of "Chaz Bono" 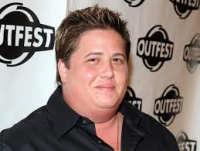 Transgender and transsexual activist; brought process of sex change to the forefront of media worldwide. Born Chastity Sun Bono, the daughter of musicians Cher and Sonny Bono. Identified as lesbian from 1995, and underwent sex reassignment surgery between 2008 and 2010 to transition from female to male. A documentary film, 'Becoming Chaz' (2011), profiles the transition. Author of two books on the experience: 'Family Outing: A Guide to the Coming Out Process for Gays, Lesbians, and Their Families' (1998), and 'The End of Innocence' (2003). Active in the Human Rights Campaign (HRC) and Gay and Lesbian Alliance Against Defamation (GLAAD). Notable as a competitor in the television reality series 'Dancing With The Stars' (2011).