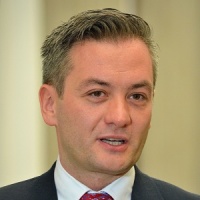 Elected Mayor of Slupsk in 2014, being the first openly gay Mayor in the country. Unsuccessfully ran for President in 2018; running again for President in 2019 for the Lewica (Left) alliance. Unveiled the new progressive party, Wiosna (Spring) in 2019 that entered the Polish parliament in the October 2091 general election, winning 49 of the 460 seats. Social Democracy Party member of parliament for Gdynia-Slupsk constituency (2011-2014), being the first openly gay member. LGBT activist. Board member of the Polish Campaign Against Homophobia.