Difference between revisions of "Welcome to QueerBio.com"

Peace Activists Who Identify as LGBTQ 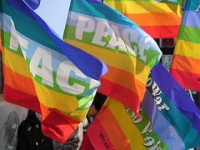 The LGBTQ community has long had a close affinity with peace activist movements. In part, this is due to the experience of general intolerance and bigotry directed toward LGBTQ individuals throughout history, which in turn pushes them away from conflict and organized violence as resolutions for disputes and toward understanding and compromise. In part, the LGBTQ peace movement in the United States emanated from the anti-homosexual initiatives undertaken by the McCarthy Commission as part of its communist-cleansing efforts of the 1940s, supported by individuals including J. Edgar Hoover and organizations such as the CIA.

There is some irony within the community between its push for equal rights in the military and the attraction to causes for peace. On the one hand, there are LGBTQ activists who want gay, lesbian and transgenders to be readily accepted for military duty, but there are also activists who see military conflict as morally repugnant. For many, the question is: does representation in the military matter more than lives lost through state aggression? This question is debated in the article referenced below.

A long-time peace activist group has been Lesbians and Gays Against Intervention (LGAI) which formed in the 1980s. One of their programs is called 'We Like Our Queers Out of Uniform', started in 1992. One of the issues the group addresses is the sponsorship of Pride and other community events by defense companies and other businesses involved in the military industrial complex.

Perhaps a bridge between the two opposing groups can be created by instituting an ethical focus to the debate. For example, the military is a source of technological innovation that greatly benefits many areas of society, so not all military activity is focused on aggression and violence. The issues of peace and security go beyond the narrow confines of offensive aggressive policies, and latitude could be given for the multitude of activity within the military complex.

There are institutions and organizations involved in peace activism that are attractive to the LGBTQ community as a whole. These include the Nobel Peace Prize, Human Rights Watch, Amnesty International, Journalists Without Borders, and more. There are prominent LGBTQ individuals within these organizations and programs. Lesbian American Jane Addams received the Nobel Peace Prize in 1931, and gay Irishman Colm O'Gorman is the Executive Director of Amnesty International in Ireland.