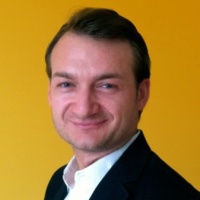 Director of the international human rights program, Arcus Foundation. Served as an advisor to a member of the European Parliament, focusing on human rights and social justice issues. Previously, he was program director for the International Gay and Lesbian Human Rights Commission, where he designed and implemented the organization’s strategy at the United Nations. Former acting director and program associate of the Baltic-American Partnership Fund at the Open Society Institute. From 1997-2002, he was the executive director of ACCEPT, the Romanian national human rights nongovernmental organization (NGO) working for LGBT equality. He also served on the board of the European Region of the International Lesbian, Gay, Bisexual, Trans and Intersex Association.