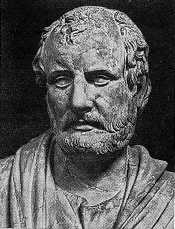 Diplomat and orator, involved in the military battles which culminated in Greece losing its independence to Macedonia. One of the ten Attic orators of the classical era. Several times was attacked by other politicians and accused of treason for his peace urgings with Macedonia, for which he was acquitted. Finished his life in exile at Rhodes, where he operated a school of rhetoric. Acknowledges that he himself is erotikos (a lover of boys), and he also wrote poems of an amatory nature for boys.