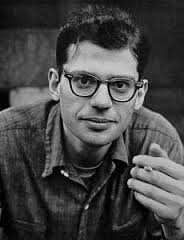 Poet and LGBT activist. Considered a founding father of the 'Beat Generation' and the hippie generation. Noted for his work, 'Howl and Other Poems'. Noted as a non-violent protestor of the Vietnam war. Winner of National Book Award (1974), National Arts Club Gold Medal (1979), American Academy and Institute of Arts and Letters. His subject matter and use of abusive language has been credited for changing many obscenity laws. Compatriot of the writer William S. Burroughs. Partner was fellow poet Peter Orlovsky.