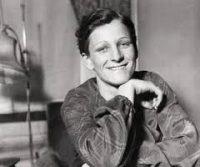 Babe Didrikson was the living image of the perfect sportsperson. She not only excelled in one sport – she excelled in all of the sports she set her mind to. This included track and field, golf, baseball, boxing, swimming, basketball, and more. Her success at these sports made her the Associated Press’ ‘Female Athlete of the Half Century’ in 1950, and ‘Female Athlete of the Twentieth Century’ in 2000. She accomplished her stated goal – to be greatest athlete that ever lived.

Born in Texas in 1911, Didrikson attended high school but left early when recruited to play basketball. She played as an amateur while working as a secretary. Didrikson quickly led her team to the national amateur championship in 1931. She began developing a reputation for her self-confidence in sports, something that others would often call cockiness or arrogance. She earned her nickname after baseball player Babe Ruth.

Immediately after this first success, Didrikson turned her attention to track and field. She entered an amateur athletic competition as the only member of a ‘team’ and won six of the eight events. In the process, Didrikson set world records in high jump, 80 metre hurdles, javelin, and the baseball throw. She entered the 1932 Los Angeles Olympic Games and won gold medals in javelin and the 80 metre hurdles and broke 4 world records.

At this point, Babe Didrikson turned her focus to golf. Once again, her sporting talents came to the fore very quickly. She became one of the leading female players of the 1940s and 1950s, first as amateur and then professional. It was during this period that her public celebrity was established. She won a total of 55 golf tournaments, including a string of 17 in a row. She co-founded, with two others, the Ladies Professional Golf Association (LPGA) in 1949.

Didrikson attempted on several occasions to compete directly with men in the Professional Golf Association (PGA). She did so successfully by making the cut in every tournament she entered. However, when she applied to play in the 1948 U.S. Open, her application was rejected on the basis that she was a woman. Didrikson subsequently went on to win the Grand Slam of the Women’s majors in 1950. In 1951, she entered the Hall of Fame of Women’s Golf.

The popular press was mesmerized with Babe Didrikson throughout her career. A good reason for this was her aggressive personality, self confidence, and cockiness, which all made for great print. Another reason was due to her penchant for being different in her appearance – she dressed in men’s clothes and projected an image of manliness that was considered inappropriate

Despite having married professional wrestler and golfer George Zaharias in 1938, it was never a happy one. In 1950, Didrikson met another female golfer, Betty Dodd, and the two immediately fell for each other. They became increasingly more attached, to the point where they lived with each other full time. There is no question as to the intimacy of the relationship.

Similarly, there is no doubt about Babe Didrikson’s natural athletic abilities – her record speaks for itself. She remains the greatest female golfer of all time, and excelled in every single sport that she put her attention to. The ESPN sports network has described her as the first to prove a girl could be a stud athlete. She performed successfully at a time when female athletes were generally accepted but considered odd and out of place, a point reinforced by the popular press.

It is her fighting determination, self confidence and persistence that may be her lasting legacy. Didrikson refused to be cast as the typical or stereotypical woman of her generation, both in character and appearance. This behaviour, though regarded as odd or perverse, garnered her sufficient press coverage to make her an international sports celebrity.

Did Babe Didrikson go so far as to publicly identify with her true sexual orientation? Despite her public profile and awareness of the intimate relationship with Betty Dodd, Didrikson did not take that ultimate step. Even for one whose self confidence was overwhelmingly abundant, and despite the fact she was considered a woman ahead of her time, she could not directly address the homophobia of her generation. This shows the power of intolerance toward anyone who goes against sexual norms and makes the recent successes in the fight for LGBTQ rights that much more impressive.