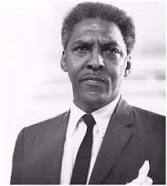 Byard Rustin was one of the earliest and most influential Civil Rights leaders in the United States. He advocated a policy of non-violence as a means to oppose the policies of segregation, bigotry, and discrimination against the black population. It was because of Bayard Rustin that the leadership of the Civil Rights movement adopted peaceful action as a principle and a strategy.

Rustin’s exposure to Civil Rights activism came at an early age through his parents. After graduating from Wilberforce University with a music scholarship, he moved to Harlem and became involved in numerous Civil Rights projects while making a living as a singer in nightclubs. He became a proponent of peaceful resistance as advocated by his hero, Gandhi. For example, he refused to fight in World War II, a position that would harm his reputation later in life.

Rustin’s first major Civil Rights action which he organized was The Journey of Reconciliation in 1917. It was a series of Freedom Rides designed to challenge the Supreme Court’s ruling against racial discrimination in interstate travel. He was repeatedly arrested and imprisoned for violating various segregation laws on public transportation in the southern states.

As the Civil Rights movement gathered momentum, Bayard Rustin took on the role of advising Martin Luther King Jr. on peaceful resistance. He was the principle architect of 1963’s March on Washington for Jobs and Freedom. This was hugely successful and resulted in the passage of the 1964 Civil Rights Act and the 1965 Voting Rights Act. It should be remembered that, at the time, a march of 250,000 people on Washington was unprecedented.

Upon the passage of these two important pieces of Civil Rights legislation, Byard Rustin expanded his interests to include the economic issues faced by African Americans. He became head of the labour union’s Randolph Institute, which was tasked with the integration of the black and white unions in America. He also became chairman of the political organization Social Democrats, USA. These moves represented his shift from protest to politics, a move he justified by the increasing success of the Civil Rights movement.

Throughout his active engagement on all of these issues, Bayard Rustin lived an open homosexual life. He was arrested on numerous occasions and charged with homosexual acts, serving several prison terms when convicted. He was pardoned for these convictions in 2020. At the time, these arrests and convictions, of course, provided ammunition for his opponents, both within and without the Civil Rights organizations. The former were hesitant to fully embrace him on the concern that his gay life would damage the cause, whereas the latter attacked him as a ‘pervert’ and ‘immoral’ person in society.

Nevertheless, the charges did not phase him. Bayard Rustin remained an LGBTQ activist throughout his life. He actively fought for these rights by making presentations to government, writing papers and public commentaries, and participating in non-violent LGBTQ rallies and marches.

This active role in the LGBTQ community meant that, in the short term, Bayard Rustin’s huge role in the Civil Rights movement was downplayed. Again, this reflected many black activists' belief that such behaviour tarnished their efforts.

President Barak Obama in 2013 more than made up for this slight when he posthumously awarded Bayard Rustin the Presidential Medal of Freedom. The President presented the medal to his long time companion, Walter Naegle.