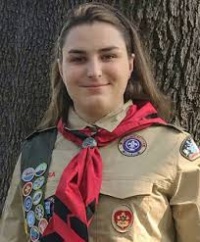 First transgender member of the Scouts of America to hold the rank of Eagle Scout, and among the inaugural class of female Eagle Scouts when she was accepted as a member in 2020. Her Eagle Scout project, for which she partnered with the Austin, Texas branch of Parents and Friends of Lesbians and Gays (PFLAG), was to make and distribute over 100 “self-soothing” kits for LGBT+ youth; the initiative was inspired by her experiences with dialectical behavioral therapy. Was originally forced to quit the Scouts movement when she transitioned, but rejoined when the organization changed its membership policy to allow female members. Honored by the city of Austin, PFLAG Austin, and Texas House Representative Gina Hinojosa for her achievements.