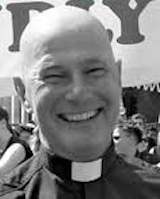 Priest and Psychotherapist. AIDS activist. Former Theological Consultant to the Board of Directors of Dignity New York - an organization for Lesbian, Gay, Transgender and Bisexual Catholics and their friends. Founded the AIDS/HIV Ministry of Dignity New York (1982). Member of the Mayor of New York's voluntary Task Force on HIV/AIDS. Author of the books 'A Priest on Trial' (1993) and 'If It Wasn't Love, Sex, Death and God' (2012). Became legally married as the first Catholic priest and partner in a civil partnership (2007). Trustee of Camden LGBT Forum.