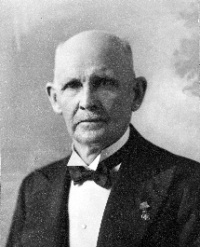 Known for his novel 'Spild' (1905). Later in life became a police officer as a constable in the Copenhagen Police Department - he was responsible for introducing the concept of finger-printing in the police services. Promoted to Inspector and Deputy Commander. Was subsequently implicated in a large homosexual scandal, and he suffered a nervous breakdown. Emigrated to the United States, but returned to Denmark to write two autobiographical books (1937, 1939). Committed suicide.