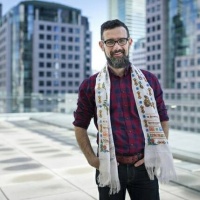 Director, Board and Executive Relations at the Toronto International Film Festival

In 2001, David Vella joined the Toronto International Film Festival as Director, Major Gifts and was appointed to Director, Board and Executive Relations in 2006. In his current role, David manages the TIFF Board of Directors and serves as their Secretary, while, with his team, also manages the offices of TIFF’s Co-Heads. CFO and Special Projects team. From 2006 to 2010, David worked with TIFF’s Building and Design Committee, architects, consultants and senior TIFF management on the construction of TIFF Bell Lightbox.

David has worked with the not-for-profit community for 30 years. Prior to TIFF, David worked at the University of Toronto fundraising for three of the University’s colleges – Innis, New and Woodsworth. Before UofT, David held various roles with the Juvenile Diabetes Foundation from 1991 -1997 in both the Toronto and national offices.

David currently chairs the Board of JAYU, a group that uses the arts to share human rights stories. He currently sits on the boards of the Canadian Sport Film Festival and Kuenzi Foundation. Previous board roles include Inside Out, an LGBT group who annually host the Inside Out Film Festival in both Toronto and Ottawa (former Board chair and currently on the Finance Committee), and Volcano Theatre Company, as well as the Advisory Board for the Mark S. Bonham Centre for Sexual Diversity Studies at the University of Toronto.