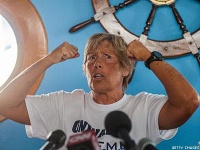 After four unsuccessful attempts over a period of 35 years, Diana Nyad in 2013 became the first person in history to swim from Cuba to Florida in open waters. This 110 mile journey took her 53 hours of non-stop swimming to complete and bested attempts by thousands of swimmers over the years.

Diana Nyad was a swimmer from the very young age of eleven. She was active during her high school years, winning the Florida state high school championships in the backstroke at both 100 and 200 yards. During her college days, Nyad became interested in marathon swimming and trained with the legendary coach Buck Dawson. She started setting world records in such races. Examples include:

During the 1980s and 1990s, Nyad focussed more of her attention on a career as a broadcast journalist. She is known for her appearances on the television shows Wide World of Sports, One on One With Diana Nyad, and National Public Radio’s The Savvy Traveller and The Score. She was a producer for Fox Sports Network from 1996 to 2001.

During this time, Nyad entered into a public long-term relationship with another woman. She wrote three books: Other Shores (1978), Basic Training for Women (1981), and Boss of Me: The Keyshawn Johnson Story (1999).

Diana Nyad returned to her dream of swimming from Cuba to Florida at the beginning of the Twenty First century. To do so required her to refocus her energies and training on both the physical and mental levels. Indeed, marathon style endurance sports are as much about positive mental focus and discipline as it is on the physical. Her first attempt had been in 1978, but strong winds and currents repeatedly pushed her off-course and she was forced to abandon.

In August 2011, Nyad attempted the swim again but had to abandon the effort 10 miles short of her goal due, once again, to strong winds and currents. Her third attempt in September 2011 was abandoned due to box jellyfish stings (whose deadly venom has claimed more human lives in the past 50 years than shark bites) that caused her respiratory distress. Her fourth attempt in August 2012 had to be abandoned for the same reason.

Nyad’s fifth, and ultimately successful, attempt began on August 31, 2013 with a 35-member support team. Swimming in open water and without a shark cage, Nyad had on a special jellyfish-protection suit to prevent stings, but this also slowed down her efforts. With favourable currents and little wind interference, she landed at Key West, Florida after 53 hours of swimming. At the time, the swelling and abrasions from her silicone mouth mask made talking difficult. Nevertheless, she was overjoyed by her world record.

Diana Nyad has been inducted into the International Swimming Hall of Fame (2002), the International Sports Hall of Fame (2006), and the Gay & Lesbian Sports Hall of Fame (2014). She was named National Geographic’s Adventurer of the Year in 2014. Nyad credits her result to a dogged determination to accomplish things, regardless of age; the ego rush she gets as she nears the completion of a swim; and the mythical experience associated with night swimming where she finds herself contemplating the nature of the universe.

Diana Nyad has made no secret of her lesbian life. In 1999 she participated in a New York Times forum about the sports world and the LGBTQ community with other open athletes. An episode of In the Life entitled ‘The Last Closet’ (2007) on the PBS television network was hosted by Nyad and discussed the heteronormative world of sports.

The record-breaking accomplishments of Diana Nyad show that there is no need for such barriers in the sports world. Rather, it is the determination and skill of the individual, along with the support network, that leads to accomplishment.