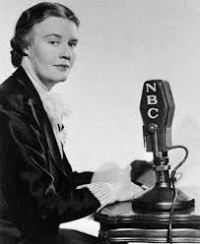 Noted for her coverage and criticism of Nazi Germany, where she was expelled. Later, Journalist for the New York Tribune. Had an affair with Christa Winsloe when in Germany, though she later had several heterosexual marriages. In 1939 was recognized by Time magazine as the second most influential woman in America next to Eleanor Roosevelt. One of the few women news commentators on radio during the 1930s. Often considered as the “First Lady of American Journalism.”