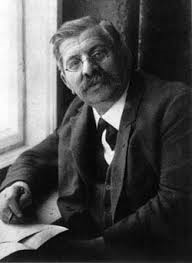 Magnus Hirschfeld is considered the most significant scientific theorist of sexuality and homosexuality. As a result of his scientific work, which confirmed the biological and medical explanation for an individual’s sexual orientation, he became an outspoken advocate for all sexual minorities.

Hirschfeld studied philosophy in his undergraduate school years, and medicine in his graduate years, earning his doctoral degree in 1892. He began in private practice in Magdeburg before moving to Berlin where he began his activism. This was driven by the immense attention being paid to the Oscar Wilde trial at the time. His response to this was to advocate for the legality of homosexuality.

Hirschfeld founded the Scientific Humanitarian Committee to centralize his research and activist work. He put forward a concise medical explanation for homosexuality – specifically, that the origination of the male and female homosexual occurred during the development of the embryo and is, in essence, a development defect during this stage.

The Institute for Sexual Research was established in 1919 by Hirschfeld to be the centre of his work on the subject. It provided medical consultations and served as the archive and library for an extensive amount of research material on the subject. It published a distinguished research journal on the subject of sexual variants. People from all over the world travelled to its Berlin office to both participate in the studies and to learn more about the origins of their own sexual orientation.

Hirschfeld became both a campaigner and scientist on the subject, receiving great attention and acclaim for his path-breaking work. In all, he categorized a total of 64 possible types of defect in the development stage that could lead to different degrees of homosexual tendency. This discovery blurs the distinction between man and woman and introduces the idea of sexual gradation, an important foundation for Alfred Kinsey’s later work. On the basis of these studies, he unsuccessfully petitioned the German government for the legalization of homosexuality.

Hirschfeld authored a series of books on the subject that received wide acclaim. Most notable among these are Homosexuality of Men and Women (1922), Sex in Human Relations (1935), and his five volume Sexual Science (1926-1930).

The rise of Hitler’s National Socialism put an end to Hirschfeld’s breakthrough research. Hirschfeld and his organization were increasingly the subject of verbal and physical abuse until he was forced into exile in 1933. The Nazis attacked Hirschfeld’s Institute and burned its books and archival material.

Unwilling to give up, Hirschfeld travelled the world on popular speaking engagements, settling in Switzerland where he summarized his experiences and observations. He finally resettled in France to continue his research but succumbed to a heart attack at the age of 67. His death was mourned by his long-time lover Karl Giese.

Throughout his life, Hirschfeld adopted the slogan ‘Through Science to Justice’. This was a reflection of the continuing effects of the scientific revolution on all aspects of academic research. Hirschfeld believed strongly that scientific method could be applied to explain the existence of homosexuality in society, and once so explained could not be refuted but rather embraced. Scientific understanding and explanation of homosexuality should lead to tolerance, he believed. In this respect, he is the progenitor of today’s queer and gender studies.