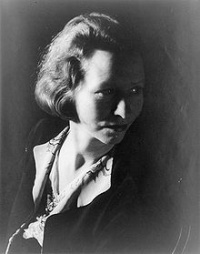 Lyrical poet and playwright. Noted for both her dramatic works, including 'Aria da capo', 'The Lamp and the Bell', and the libretto composed for an opera, 'The King’s Henchman', and for such lyric verses as “Renascence” and the poems found in the collections 'A Few Figs From Thistles', 'Second April', and 'The Ballad of the Harp-Weaver', winner of the Pulitzer Prize in 1923. Frank portrayal of homosexuality in her poems. Bisexual, who scandalized the nation with her relationships at the time. Created the phrase 'My candle burns at both ends'. In 1943 Millay was the sixth person and the second woman to be awarded the Frost Medal for her lifetime contribution to American poetry. Feminist. Used the pseudonym Nancy Boyd in her writings.